President Trump says that trade wars are easy to win. It depends on the definition of winning.

The Chinese government announced recently that state agencies must begin replacing foreign-made PCs and software, according to a report from the Financial Times.

While this may not seem like a big deal, the directive is expected to impact 20 to 30 million pieces of hardware scheduled for replacement in 2020, and is a direct attack on Microsoft (MSFT), the company behind the dominant Windows operating system.

More important, it sets the stage for a great tech balkanization, two business silos dominated by Chinese and American interests. These markets will be smaller.

This process began last May when the Commerce Department announced that it would impose a blacklist on Huawei, the world’s largest telecommunication s equipment company. A blacklisting meant American companies were effectively barred from doing business with Huawei. In theory, the strategy would starve the Chinese conglomerate from the components it badly needed to build state-of-the art gear. It was supposed to be a death blow.

However,  Huawei noted that its newest Mate 30 smartphone did not have any U.S. made components. This is no small accomplishment given the cutting edge device is widely considered the most technologically advanced device on the market. It also competes head to head with iPhone 11, Apple’s flagship device.

Chin’s new plan, 3-5-2, will see state agencies drastically reduce their reliance of American-made technology. Chinese divisions must reduce the purchase of U.S made goods by 30% in the first year, 50% in 2021 and 20% in 2022.

The directives are aggressive, and they are potentially devastating for companies like Hewlett Packard (HPC), Dell Computers (DELL), Intel (INTC) and Microsoft. These America giants have substantial Chinese businesses.

And they are not the only U.S, companies in peril.

China is fast-becoming the world’s largest consumer market. Companies as diverse as Boeing (BA) and Starbucks (SBUX), Ford (F) and the leading money center banks depend on the market from growth.

Forbes reported in May 2018 that a number of American businesses and sectors have made substantial investments in China. A sudden course change by the state could throw a monkey wrench into everything.

I have been cautious about the trade war since it began two years ago. Pushing Chinese state sponsored agencies to go without American-made goods and services was always a recipe for greater Chinese innovation. Regardless of politics and endgames, lost markets were inevitable.

It’s more worrisome is that the White House doesn’t seem to care about those lost markets. President Trump believes Facebook (FB), Google and Amazon.com (AMZN) have been against his presidency from the beginning, according to a June Business Insiderstory. He sees tech leadership as political foes. There is very little incentive for him to expend his political capital to help.

Investors are well advised to take all of this in stride. The best technology investment may be in companies with almost no presence in China, and beyond President Trump’s radar.

Mastercard (MA) has no substantial Chinese business. It’s not for lack of trying. The company submitted an application in 2018 to process payments in renminbi, the local Chinese currency. The state government didn’t even bother to act on the application.

No matter. The rest of the business is solid, if not well understood. The New York company is a pure transaction processor. It carries no credit risk. And it is not subject to the ebbs and flows of the economy, not really.

Mastercard’s business is pushing more of the world’s transactions, whether is it buying something at the local mall, a gift card or a government transfer payments, toward digital processing. The goal is to marginalize cash. As consumers move toward smart devices and online banking, this business is only getting better. 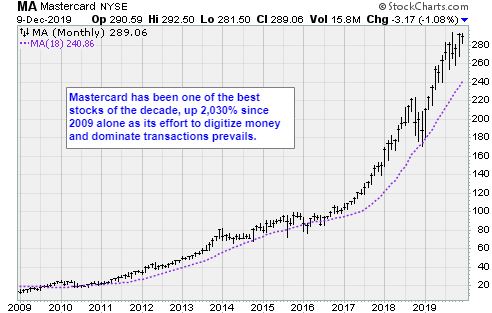 A 2017 report from McKinsey & Co., a global management consulting firm, forecast in that global payments would reach $2 trillion in 2020, two years faster than expected. Analysts pegged the 2022 threshold at $3 trillion.

Some 40 billion devices will be interconnected within a decade. Gas pumps and carwashes will hook up with the computers in cars. Everything will share a connection with encrypted, personal financial information stored away in the cloud. Right now, only a few companies have the scale to pull that off. Mastercard is one of those businesses.

The trade war is going to be a big problem for technology companies. Investors are being lackadaisical. Use strength to exit semiconductor, software and computer hardware companies. Use weakness to begin accumulating a position in Mastercard.

Shares trade at 33.8x forward earnings for a market capitalization of $293 billion. That is reasonable given where transaction processing is headed, and Mastercard’s position as an industry leader.

The shares could easily move to $425 by 2021 from their current perch as price/earnings multiples expand further. Charge.

Profit from the digital revolution with the popular Strategic Advantage newsletter.
Take a Free 2-Week Trial