7 Incredible reasons you should be investing in animal medicines

Pharmaceuticals giant Pfizer(PFE) has been the standard bearer of the drug development industry for decades. The company has been around over a century and a half, and is now valued at over $214 billion.

If you feel like you have missed out on the past 150 years of upside, well, there's hope -- because little known Zoetis Inc (ZTS) will give you an opportunity to own a very similar company that is a tenth of Pfizer's size yet is already the dominant player in its niche. This is the type of idea we used to call a New Hotshot. It's not a value pick, as it's not cheap, but I still wanted to bring it to your attention.

1. Zoetis is the Undisputed Market Leader in Animal Medicines

Zoetis is the world's largest producer of medicine for animals. The company develops, manufactures, and commercializes medicines and vaccines for livestock and companion animals, and is essentially the Pfizer of the animal world. If you care about Fluffy and Rex and your next steak, then you should care about Zoetis.

2. The Market for Animal Medicines is Fast-Growing and Diverse

The animal health sector is more closely related to human health than you might suspect. According to the United Nations Food and Agriculture Organization, 70% of the new diseases that have emerged in humans over recent decades first originated in animals. Additionally, seven out of ten known human diseases are considered "zoonotic," meaning they can be transmitted back and forth between animals and humans. 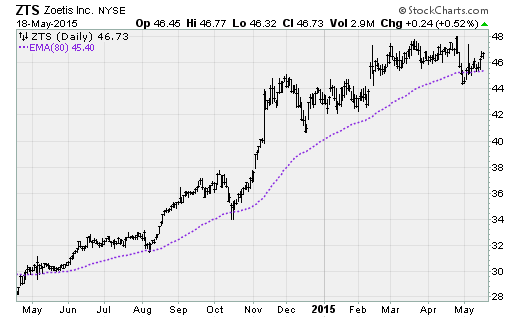 3. Zoetis is a Global Leader with Sales in 120 Countries

Despite being public for less than three years, Zoetis is no new kid on the block. The company's roots date back to the fifties, when it was initially a division of Pfizer. In 1952, their bio-engineers discovered that one of their human-focused antibiotics proved effective in treating cattle, and thus the precursor to the Pfizer Animal Health division was born. By the time it was spun off in 2013, the company was already a global leader, generating over $4.3 billion in annual sales in 120 different countries.

The operations are divided between Farm Animal and Companion Animal Products divisions, with the former responsible for two-thirds of total revenues. The farm animals segment caters primarily to veterinarians and livestock producers, helping them reduce herd loss with treatments that prevent everything from fleas and ticks to more complex gastrointestinal and respiratory issues.

Zoetis' growth prospects in this area are expected to be fueled by a growing global population and the expected animal protein and milk constraints that will come about as a result. According to the United Nations, by the year 2050, the world will need to double food production to feed a global population that is estimated to surpass nine billion.

5. Pet Medicines is Growing Too, Especially in the Emerging Markets

Meanwhile, the products in the companion animals segment are directed at improving the quality and extending the life of cats, dogs, and horses. The major growth drivers here are increasing rates of ownership and spending on pets, especially in emerging markets.

These two operating divisions of the company sit at the intersection of several global tailwinds within the $100 billion animal health industry. More importantly, about 20% of that market is animal medicines and vaccines explicitly, the bread and butter (or kibble and bits, if you will) of Zoetis.

6. Competition is Limited and Margins High

Additionally, animal health companies have some very clear advantages over their human health counterparts, including very little competition from the generic drug market. This type of pricing power, along with a strong patent lineup shows up in the gross margins, which are north of 64% and among the highest in the industry.

7. Corporate Leadership is Stable and Strong

The company is led by chief executive Juan Alaix, who has been in place since ZTS went public. He previously served as president of Pfizer Animal Health since 2006.

Zoetis is a dominant market leader with decided scale advantages over its peers, operating in an industry with clear macro tailwinds. That combination has afforded shares a deservedly valuation, currently at about 25x next year's earnings. Net income has grew at a 33.5% annual rate the last three years, and shares are up over 100% since going public. As long as your recognize that this is not a screaming value buy, it is still a smart long-term pickup on big pullbacks.