To get our regular email updates, simply click here.

Cloud computing is vital to the growth of Facebook (FB) and Microsoft (MSFT). In May, the two companies announced they’re teaming up to build a 4,100 mile, transatlantic underwater cable between Europe and U.S. eastern seaboard.

You probably think of cloud computing as space-age, cutting edge. The idea that in this day and age powerful data centers are still linked by miles of bulky cable seems anathema.

Cloud computing, despite what its name implies, is in reality hopelessly stuck to the ground through a web of cables, data centers and technology service providers. Satellites are "neither fast nor good enough," industry analyst Alan Mauldin of TeleGeography told USA Today. "There's a huge delay." In contrast, cables provide near-instantaneous reactions, are more robust and a lot cheaper. As technology companies increasingly become international, "the cloud is under the ocean," the analyst said.

We've been on a significant roll in our sister trading service Tactical Options.  The service has recommended 46 plays this year, and averaged a gross gain of 29.4% per trade. Recent plays include a 165% gross gain on Peabody Coal (BTU) puts, a 156% gain in a SPY put spread, a 107% gain on SPDR Consumer Staples (XLP) puts last week, a 49.5% gain by going short SPDR Regional Bank (KRE) puts last week and an eye-popping 550% gain in a PayPal put spread two weeks ago.  Options are not for everyone but if you'd like to know how we consistently earn profits like these, visit the Tactical Options page here.

Facebook runs a quintessential cloud business. Its network is device agnostic, robust and fast. People in Mumbai sifting through their news feed and munching aloo parathas demand the same low latency experience as San Francisco night-clubbers posting pictures to Instagram. Facebook’s secret is proximity. It keeps its data centers close to its customers because latency increases as data moves away from its endpoint. And with Facebook’s public ambitions to grow the business into the developing world, it needs its data centers closer to the masses in Africa, the Middle East and Asia.

Microsoft is looking for the same type of reach for its cloud services Bing, Xbox, Office and the Azure public cloud. Securing a super fast data connection between hubs in the US and Europe means multinational corporate clients can provide better user experiences overseas.

And it is a big, varied business. Research outfit Gartner projects the public cloud computing sector is expected to grow to $204 billion in 2016, up 16.5% from 2015. To put the size and fragmentation of the sector in perspective, Amazon Web Services is the leader and it’s projecting about $10 billion in sales for 2016. That leaves plenty of space in the market for Azure, IBM (IBM) and Alphabet (GOOG) to grow their nascent public cloud businesses. 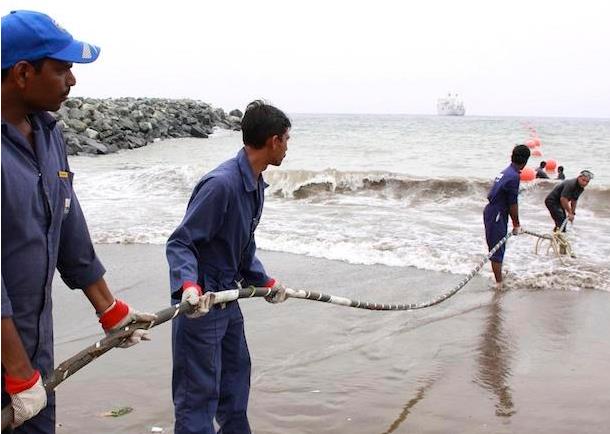 There is also lots of opportunity for the lesser known companies that own, operate and maintain data centers, and IT service providers like Level 3 Communications (LVLT) that run the cable to from those centers. In fact, Level 3, having swallowed most of the fiber optic cable glut of the 1990’s – including Global Crossing, a firm that made transatlantic cables -- may be uniquely positioned because of its 350 facility footprint. (Above, workers pull telecom cable to shore.)

While the Microsoft-Facebook cable, called Marea, is only about the width of an ordinary garden hose, its capacity is massive, at 160 terabits per second. Currently there are about 337 terabits of potential capacity across the Atlantic. When the Marea cable comes online in 2017, “this one cable will be able to do almost half of what all the cables do” combined, Mauldin said.

There are some challenges. Last year the European Union Court of Justice overturned the Safe Harbor agreement that allowed US firms to transfer data between the US and Europe unrestricted. Its messy replacement, Privacy Shield, gives each of the 28 EU member countries the facility to individually negotiate data transfer agreements with US companies.

Cloud computing hardly conjures up the image of cables snaking along the ocean floor yet this type of infrastructure is just as important as the fancy user facing software. The Achilles heel of the cloud is latency. Cables, data centers and IT service providers fix latency. The sector is young and ripe with many investment opportunities in all parts of the value chain.

To learn more about the fascinating world of undersea telecom cables, including why sharks like to gnaw on them, click here.

About Jon Markman:  A pioneer in the development of stock-rating systems and screening software, Jon Markman is co-inventor on two Microsoft patents and author of the bestselling books The New Day Trader Advantage, Swing Trading and Online Investing, as well as the annotated edition of Reminiscences of a Stock Operator.  He was portfolio manager and senior investment strategist at a multi-strategy hedge fund from 2002 to 2005; managing editor and columnist at CNBC on MSN Money from 1997 to 2002; and an editor, investments columnist and investigative reporter at the Los Angeles Times from 1984 to 1997.

To get our regular email updates, simply fill in the form below: