Tesla (TSLA) has a problem. People really like its products and it can sell every electric car it makes. It can also sell every car it promises to make too. It just can’t make as many as it has promised. So it hired a graybeard, an industry veteran to help it actually build cars.

Creating the type of feverish demand that leads to lineups and waiting lists would be a very good thing for most companies. For Elon Musk, the visionary co-founder and leader of Tesla, that’s the easy part. Like Steve Jobs at Apple (AAPL) before him, Musk is the consummate pitchman. He set out an ambitious plan for the company: Move the world from a dependence on dirty hydrocarbons to a reliance on cleaner solar electric, creating a sustainable energy economy without compromise.

That’s a compelling pitch and people immediately bought in. Tesla has always had waiting lists for its eco-friendly yet performance-oriented cars, culminating with the launch of the Model 3, an affordable electric car for everyone. On the morning of the launch, thousands of loyal Tesla fans lined up at sales locations worldwide and plunked down $1,000 for the right to buy one sight unseen. When online sales were announced, the waiting list swelled to 115,000. Within a week the number had reached toward 400,000.

Unfortunately, Tesla has never been very adept at actually making cars. Despite building a high-capacity factory in California, filled with the best robots, it made just 50,568 cars last year. Its Model X SUV, with signature falcon-wing back doors, was delayed two years. Now it’s hopelessly back-ordered. And it’s plagued with quality complaints.

Despite this, Musk hopes to build 500,000 vehicles a year by 2018 even as he also builds a massive 5.8 million-square-foot battery-manufacturing plant in Nevada and a costly global network of charging stations. The company announced on Wednesday a public offering of about $2 billion shares of its common stock to accelerate the ramp of the Model 3. 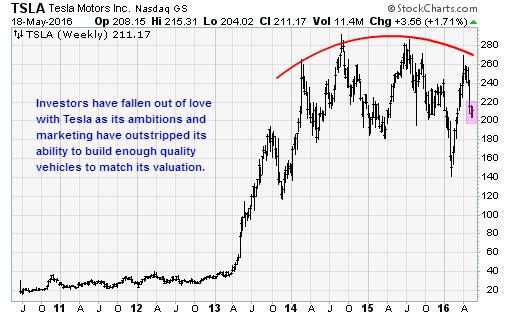 The obstacle is talent. The unintended consequence of U.S. manufacturing flight during the last three decades is there are simply too few engineers withexperience building things with lots of moving parts. Tesla’s recently departed manufacturing lead, Greg Reichow, is a SunPower (SPWR) and Cypress Semiconductor (CY) veteran. Tesla is more about clean energy and semiconductors than most motor vehicles but it’s still a motor vehicle first.

On Friday, Musk finally faced up to reality and announced the hire of Peter Hochholdinger, a 22-year veteran and senior executive at Audi. There he oversaw the popular A4, A5 and Q5 vehicles and he was in charge of thousands of employees producing 400,000 vehicles a year. In short, Hochholdinger fills the manufacturing talent void at Tesla.

That’s a good thing because competition is coming alive after being asleep at the wheel.Tesla was the best-selling luxury car in Western Europe in 2015, selling 15,787 vehicles to the Mercedes S Class’ 14,900. So Mercedes is fighting back with four new all-electric cars. It will bring out an SUV and three midsize models in 2018, with most of the focus on the Concept IAA recently shown in Frankfurt. Audi will follow with the Q6 E-tron , a sport crossover in 2018 and Porsche’s beautiful Mission E is confirmed for production in 2020.

The future of Tesla depends on meeting its lofty production goals ahead of the competition onslaught. If it fails, there is a very real chance Tesla will run out of capital even after the sale of the announced sale of shares. On Friday, a Barclays analyst speculated the company might need to raise an additional $3 billion this year just to ramp up production for the Model 3.

The good news is that Musk has built a great brand, lots of people have bought in, and there’s huge potential leverage in the battery factory and the charging station network. To get there, Tesla needs to focus on making cars, not promises.