NOTE:  If you're not getting our timely market updates by email, click here to sign up now.

Stocks are following the script of a typical May so far, according to an analysis by Bespoke Investment Group. The chart below shows the historical intraday performance of the S&P 500 during the month of May going back to 1983, and throughout the current bull market. Equities have generally fared poorly at this time of year. The black line on the chart shows the current year; the green line is the average intraday path of the market benchmark of the current bull market (2009 to present); the blue line is all years (1983-20015). 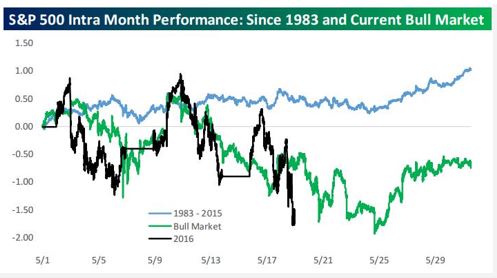 After starting off this month higher, the S&P 500 sold off for the remainder of the first week of May and then rallied back for a few days. From there, however, it has been all downhill as equities have slumped, just like they normally do in the middle of the month, the Bespoke analysts point out.

So while there hasn’t been much to write home about for bulls so far this month, Bespoke argues, history suggests a finish with a flourish. Something to look forward to next week, with any luck.

If you're not getting our thrice-weekly email updates on the markets, fill in the form below: