While leaders in Athens said they are pushing for a final deal, officials in the eurozone headquarters remained very skeptical. A Bloomberg report noted that Greece and its creditors are still far apart, with pensions, sales tax and budget surplus targets as usual among the big sticking points. 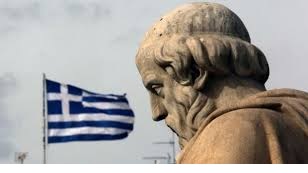 Greece owes so much money and has so little means to repay that all these talks are like trying to jump over the Atlantic Ocean with a pogo stick. It's just not going to happen in a conventional way. Greece cannot make good on all of its debt, and the group with the most to lose is probably the eurozone -- so my guess is that they will cave in some way.

Despite being a part of the euro currency, Greece is still a sovereign country, don't forget, which means its credit overlords can't throw it in jail or overrun it with tanks. There has to be a negotiated solution, and that's going to include losses for creditors, which are sometimes called "haircuts." Until that is recognized, volatility on this topic will continue to sour global markets.

Yet it's not the end of the world even if Greece defaults. There are plenty of examples in recent world financial history where defaults or near-defaults have taken place and life has gone on. Hello, Argentina. Hello, Russia. Hello, Mexico. Still standing? Yes? OK, case closed.