The biotech industry holds a variety of important conferences during the year where scientists and companies present their latest molecules, discoveries, therapies and big thoughts.

The American Society of Clinical Oncology held its annual meeting in Chicago and it often produces news that moves individual stocks in the discipline.

I ran across a good analysis of current conditions in the cancer treatment space by analysts at TIS Group, and wanted to share them with you. This is going to sound very technical, but trust me it is a very pared down version of the original.

All the reporting and insights come from TIS Group. I have just paraphrased them below, and added some definitions:

-- The ASCO meeting is closely watched for news concerning new oncology treatments and clinical trial. Among the most anticipated presentations are those that will address the cell checkpoint signaling pathway involving the Programmed Death-1 receptor (PD-1) and its cognate ligands PD-L1 and PD-L2. (Note: A ligand is basically a small molecule that binds to a receptor and alters its shape, which in turn changes its function. A class of drugs that block PD-1, the PD-1 inhibitors, activate the immune system to attack tumors and are therefore used to treat cancer.)

-- It is known that tumor cells that express PD-L1 are generally indicative of very aggressive tumors and indicate a poor prognosis. Tumors expressing high levels of PD-1 are also able to escape detection by the host immune system, which allows disease to progress without symptoms, thereby contributing to the poor prognosis when tumors are diagnosed late in the disease process.

-- Due to the importance of PD-1 in the function of many cancers, drug therapies directed to the inhibition of PD-1 signaling are actively sought by many biopharmaceutical firms. To date, human clinical trials have shown that anti-PD-1 therapeutics have a good safety profile. For Bristol Myers Squibb (BMY) and Merck (MRK), whose PD-1 inhibitors have been approved for melanoma, sales have been rising.

--Around 76,000 Americans are diagnosed with the most common form of melanoma, or skin cancer, for which the two drugs are indicated. Across all indications for which anti-PD-1 therapeutics are being developed, the market will rise into the billions of dollars for approved drugs in this class. 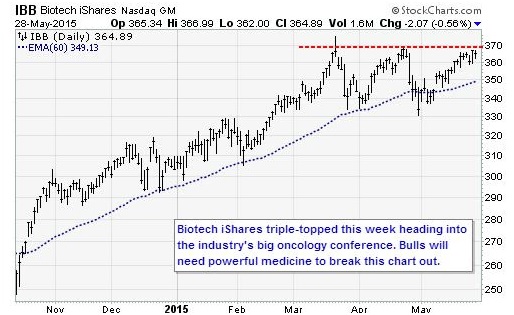 -- While anti-PD-1 therapeutics are promising, they have not shown efficacy in all patients. It seems clear that future therapies that involve PD-1 will require use of combination therapies, not just anti-PD-1 drugs alone.

-- Another area of the PD-1 therapeutics area that has been difficult to clarify is the identification of a validated biomarker, or measurable indicator of condition, to be used to determine treatment efficacy. Circulating levels of PD-1 itself has not proved to be highly correlated to patient outcome, indicating that another biomarker must be identified that can be used to monitor treatment efficacy and predict patient outcome.

-- The current matrix of anti-PD-1 drugs will represent important therapeutic advances when approved but they will not be the end of the story for harnessing the therapeutic potential of the Programmed Death-1 receptor and its cognate ligands PD-L1 and PD-L2.

-- The conference's Advance of the Year will be the transformation of treatment forchronic lymphocytic leukemia, or CLL. Chronic lymphocytic leukemia is the most common form of adult leukemia has seen rapid progress that will feature new approval options. Among these will be two new targeted drugs, ibrutinib, sold by Pharmacyclics(PCYC), andidelalisib, sold by Gilead Sciences (GILD), which are the first effective therapies for patients with previously treated CLL that has become resistant to standard treatment or relapsed.

-- TG Therapeutics (TGTX) will present new data from its CLL Genuine Phase III trial at ASCO for the firm’s combination therapy formulated from TG-1101 and TGR-1202 (small molecule inhibitor of phosphatidylinositol-3-kinase delta (PI3K). The new CLL treatments have proved to be better tolerated in patients than prior therapies, which has expanded the therapeutic window to include elderly CLL patients who account for the majority of new CLL patients.

-- Not every oncology drug is a first in class. New variants of old drugs will also be on the ASCO program. Among these will be aldoxorubicin, a prodrug of the widely used chemotherapeutic doxorubicin. CytRx (CYTR) has aldoxorubicin in Phase III for soft tissue sarcoma.

-- Historically, anticipation of the ASCO meeting has been an important driver for the share prices of presenting firms who showcase their latest disclosable research data. This is particularly true for the small-cap and mid-cap biotechs whose future fortune in oncology can be made or broken by what happens at ASCO. Keep an eye on GILD, PCYC, TRTX, CYTR, BMY and MRK, mos of which are in the major exchange traded funds such as FT Health Care (FXH) and SPDR Health Care (XLV).

From a trading standpoint, the biotech index looks very toppy as it tagged its March high for the third time on Wednesday and fell back again Thursday. If the Biotech iShares(IBB) index can bust through resistance at $370 it has an open field ahead. However a breakdown at $360 is equally possible, which opens the door to the $340 level seen as recently as early May. I'd put the short-term prognosis at a 60% chance of breakdown vs. a break-out.