After a tepid performance at the start of the year, the U.S. economy appears to be revving back up as job gains reaccelerate.

The unemployment rate bumped up to 5.5% as more confident job seekers entered the workforce, which was actually the best news of all.

Following a very strong reports on auto sales, construction spending, and factory activity last week, the odds are higher that the Federal Reserve will raise interest rates this year.  Yet the prospect of an end to really, really super-cheap money explains the muted reaction to the payroll report from stocks, even though the baby steps by which rates are expected to rise would still leave rates near historic lows.

The International Monetary Fund pleaded for rate hikes to be delayed until 2016 after marking down its U.S. GDP growth forecasts. In the wake of the strong May jobs numbers, the futures market increasingly believes Fed chairman Janet Yellen won't be able to wait that long and are bringing forward their rate hikes estimates as a result.

Yet rates are not just a concern for U.S. companies and consumers. Higher U.S. rates present a real problem for emerging countries -- especially ones that went on a borrowing binge since 2009. TIS Group analysts point out that their dollar debt is often funded by non-dollar earnings, so not only is there a risk of rolling into higher coupon debt but also floating rate debt becomes more expensive and dollar strength adds to the cost of repayment.

The reason the IMF took the unusual step of recommending that the Fed hold back on raising rates was not out of concern for U.S. companies but for the emerging markets to whom the global finance agency has made loans. It's no wonder that markets in Indonesia (IDX), the Philippines (EPHE), Mexico (EWW), Brazil (EWZ) and Malaysia(EWM) have cratered over the past few months, and look ready to take another header. 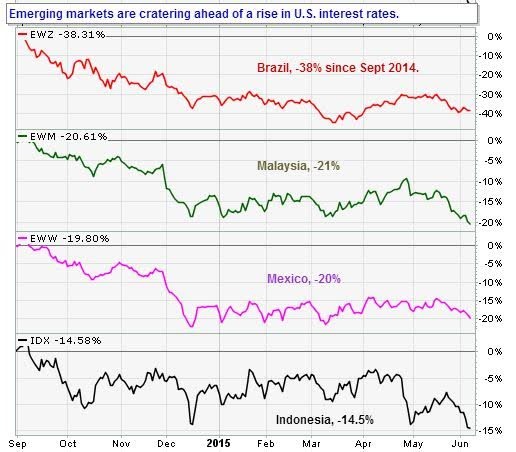 The open question is whether Yellen & Co. care more about the global economy holistically or whether they will just focus on the United States.

While GDP growth and other measures of economic activity have been tepid lately, the job market is actually performing better than it should be -- suggesting structural frictions as businesses have a harder time finding qualified workers. Consider that the jobless rate among those aged 25 years or older with a four-year college degree or more stands at just 2.7%.

The next phase should see an upward acceleration in wage inflation, the long delayed deliverance working class Americans have been waiting for in this economic recovery. The specter of higher interest rates and the potential for disorderly losses in the long-term bond market has weighed on stocks this week with the NYSE Composite falling out of multi-month uptrend support.

That suggests risky assets could come under increasing pressure in the weeks to come as we get closer to the end of the zero interest rate policy the Fed started in late 2008. Fed officials are mindful of this; with NY Fed President William Dudley admitting that the market's reaction to the first rate hike will be central to determining the pace of any subsequent hikes.