Executives for the Fitbit fitness tracker have been on a road show lately selling their upcoming IPO. One of the highlights of their spiel is that the original idea for the device came from video games -- particularly the Nintendo Wii. They fell in love with its dazzling accelerometers and gyroscopes at first sight, and brainstormed on other ways they could be used.

Zoom out a bit, and you can see in this confession a microcosm of the entire Internet of Things movement. It's all about creative engineers leveraging cheap, brawny semiconductors to connect everyday things in an effort to make life easier, safer, healthier, and more exciting.

I have been writing about the Internet of Things for a dozen years. Click here to see the first time I described it in an article in June 2003. So this is not a brand-new idea. But it's only recently that we can see that the Internet of Things has become, in the parlance of our times, "a thing." It's really happening. The future is here.

My latest obsession has been smart doorbells. No, seriously. A door-knocker isn't enough. An electro-mechanical bell isn't enough. A digital chime isn't enough. Progress doesn't rest for the first thing a guest touches when they visit your home.

Check out the Ring. It combines a wide-angle HD video camera with cloud recording and motion detection that initiates a two-way audio/one-way video conversation with your smart phone or tablet when someone rings the doorbell.

FBI data shows that most burglars check to make sure a home is unoccupied before breaking in. Even if you're half a world away, the Ring can make it seem like you're just in the next room.

One step up is the Chui face recognition doorbell, which uses a database of images to automatically unlock the door when a member of your family is recognized. No key required.

These are just two examples of the ways the Internet of Things, or IOT, is seeping into our lives -- morphing from a buzzword to a byword. 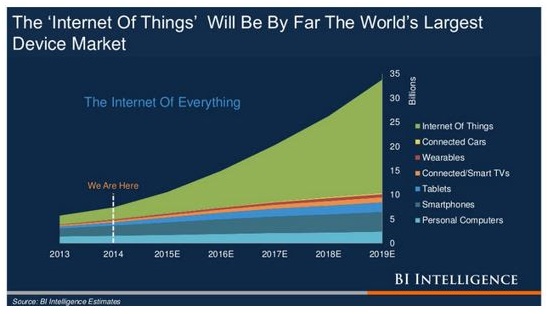 A recent report by BI Intelligence summarizes the scale of all this: By 2019, just three and a half years away, they estimate that IOT will be more than twice the size of the smart phone, PC, tablet, connected car, and wearable markets combined. If true, that would be worth $1.7 trillion in added value to the global economy. That'll be worth 6.7 billion in total device shipments for a five-year compound annual growth rate of 61%.

What's interesting is that BI Intelligence believes that only 8% of total revenue from all this growth will go to hardware makers, while the lion's share will accrue to software and infrastructure companies. Big data will benefit from being tasked with processing all the extra bytes -- from temperature trends to visitor logs and location information -- generated from the use of these devices. They estimate that the amount of data generated globally will quadruple by 2020. 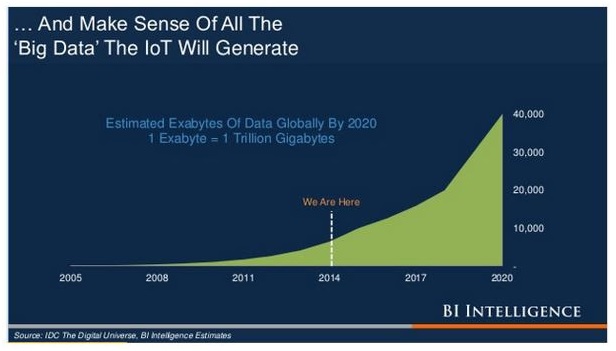 It is within this context that Google's $3.2 billion acquisition of smart thermostat maker Nest last year makes sense.

The major hurdle to widespread adoption at this point is the perception that many IOT products are gimmicky and too expensive, according to a Bloomberg survey. Security and privacy concerns are also a problem. The cost factor will be helped by the rapidly declining price of sensors, which are expected to fall from around 75 cents now to 38 cents by 2020.

The final point I want to make is that while consumer devices get all the media buzz, BI Intelligence believes that in 2018 nearly half of IOT devices will be in businesses, especially logistics firms. Overall, businesses are set to invest a quarter trillion dollars in IOT by the end of the decade in the pursuit of cost savings and operation efficiencies.

For the economy as a whole, that will be great news as capital expenditures have been a soft spot in the recovery to date.

The IOT, as an investment theme, is still young and will shape our research and recommendations for years to come.

There are a lot of companies involved in the IOT and therefore a lot of stocks. Here's a list to get you started, many of which we have discussed for years. We'll add more as we go along, with an eye toward smaller, newer companies with IOT-specific applications.

Please be aware that this is not a "must buy now" list. Put them on your radar and buy opportunistically over the next few years. This is a long-term trend, like mobile communications.