Academics love to say that the market is efficient and reflects all publicly available information with Vulcan-like logic and lack of emotion.

Yet any third-grader with experience in a sandbox knows that's not true. Manias, panics, enthusiasm, dejection, envy and regret cloud traders' judgements, and result in persistent mispricing.

It looks like some of that mispricing is at work in fallen web giant Yahoo! (YHOO), which appears to be trading a level that assigns its core business a value of -$5 per share. Almost all of the rest of its $44/share valuation, and more, accrues to its stake in Chinese web phenom Alibaba (BABA).

Investors in short are saying that Yahoo's portal business, its award-winning mobile apps, its new Screen original content initiative, Tumblr, and its cash on hand are worth less than zero. 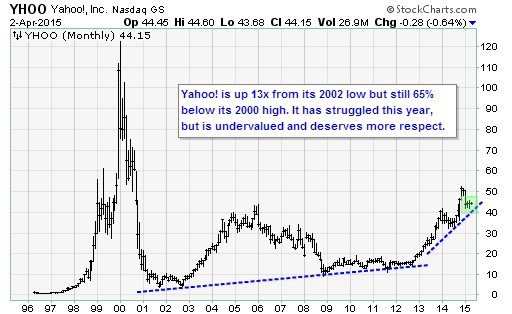 Morgan Stanley analysts that initiated coverage last week believe this is overly harsh, setting the stage for a rebound as sentiment recovers and valuation rises to a more reasonable level.

Yahoo! remains a sum-of-the-parts story until its remaining 15% stake in BABA is spun off later this year in a tax-efficient way, so let's break it down:

Buying Yahoo! at current levels not only gives access to its core business on the cheap but it provides exposure to BABA at about a 20% discount to fair value, according to Morgan Stanley's Brian Nowak and estimates by analyst Brian Lin. Although BABA's earnings growth is expected to slow to 9% this year (due to acquisitions and capital expenditurres), it should rebound in 2016 to a 35% annualized pace.

This 20% discount includes an 11% liquidity and tax discount on YHOO's stake in BABA since it is uncertain how the company will spin off its holdings and what happens afterwards. This reflects the risk the spinoff is subject to U.S. corporate taxes at some point down the road.

Yahoo!'s 36% stake in separately held Yahoo! Japan is worth $7.32 a share according to Nowak, who then uses a 20% discount in his valuation model to reflect the fact it is unlikely a spinoff or other form of monetization will happen. Yahoo! Japan is a joint venture with Softbank.

The company's core business, in Nowak's estimation, should be trading at a 4.5x multiple of his 2016 operating earnings estimate of about $1 billion -- a 15% discount to AOL (AOL) and the New York Times (NYT). This, along with Yahoo!'s net cash, should be worth $9.23 per share. While renewal negotiations with Microsoft on the search partnership dating to 2009 are heating up, there are positives here such as audience trends in its mobile display business -- an area of growth for web companies in general as the text search ads stagnate.

Overall, Morgan has assigned a price target of $55, which would be +25% from current levels.

The intrinsic value model that I license from Parallax Financial Research pegs Yahoo!'s fair price even higher, at $68.

We will know soon enough if the math adds up.

Can GoPro Get Back its Mojo? 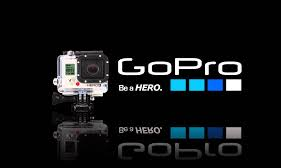 A look at why GPRO could recapture its post-IPO buzz.
Read More