While all the focus has been on the Federal Reserve over the past week, and stocks overall have paused for breath, companies like Darden (DRI) are being rewarded for doing the good work of capitalism: Growing, building, expanding, finding efficiencies, and ultimately expanding earnings.

A solid quarterly report last week has unleashed a torrent of buying interest in DRI, operator of the Olive Garden, Bahama Breeze, and Capital Grille restaurants among others. Shares have gone parabolic pushing off of the uptrend line started back in July and are now up more than 63% from last year's lows.

Not a bad run for the slinger of pasta and breadsticks. 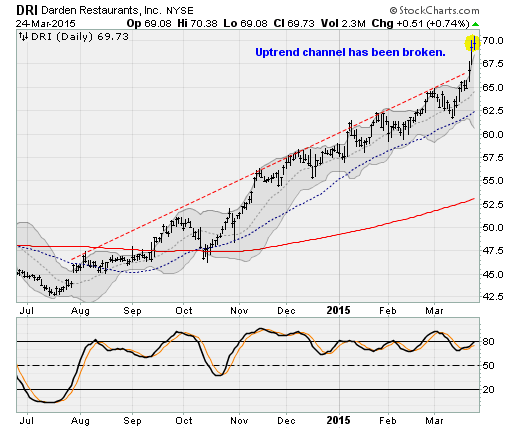 The catalyst was a solid fiscal third quarter earnings report in which the company reported earnings of 99 cents per share vs. the 84 cents analysts were expecting. The beat was driven by lower expenses. Although the turnaround efforts at Olive Garden are ongoing, the rest of the company's portfolio is running strong with an assist by its real estate monetization efforts -- which is where it sells and then leases back the land it owns, freeing up capital to make investments and pay down debt.

Additional cost cutting is coming down the pike, with management identifying upwards of another $100 million in cost savings with $30 million set to be realized this year, another $50 million in 2016, and the balance in 2017. The Telsey Advisory Group believes that these cost savings could be enough to offset any increase in rent expense from lease back transactions -- making it a win-win situation.

Miller Tabak highlighted the company's pursuit of a consumer "barbell" strategy of attracting both value-seekers as well as those seeking a high-end experience. The middle area has been soft, explaining the company's decision to dump the Red Lobster franchise a couple of years ago.

Credit Suisse analysts expect this to result in a 15% boost to 2016 and 2017 earnings. As a result, earnings per share are expected to grow 27% in 2016 and an additional 11% in 2017. Analysts are busily raising their price targets, with Oppenheimer looking for $75 while RBC Capital Markets is looking for $70.

The additional consumer purchasing power from lower gas prices is playing a role here as well, all of which fits into our thesis for owning the Consumer Discretionary SPDR (XLY), which is up 19.5% since it was added to the Strategic Advantage's Risk Taker portfolio.