The chips are down. Or at least the ones in elder care are.

The Philadepihia Semiconductor Index more than doubled from late 2012 to a high earlier this month. It's been a solid, nearly unblemished advance powered by excitement over the internet of things (everyday objects connected digitally) and excitement about a PC upgrade cycle after Microsoft ended corporate support for Windows XP and addressed some of the problems with the Windows 8 release. Ebullience and excitement reigned.

Yet some disappointment is now setting in for a couple of the largest members of the semiconductor fraternity, Intel (INTC) and Qualcomm (QCOM).

Qualcomm has been under its 200-day average in a grinding bear market for nine months. And this month, Intel has joined it in misery, sinking unceremoniously below its long term average for the first time since early 2013 after pre-announcing weak Q1 revenue (down to $12.8 billion from $13.7 billion). The company took its  earnings per share forecast down eight cents to $0.40. 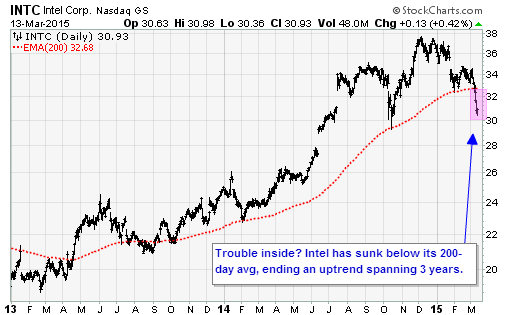 The cuts at Intel were driven by weaker-than-expected processor demand from new PC sales  to small and mid-sized businesses following the sun-setting of Windows XP as well as headwinds from the stronger dollar (a familiar theme lately).

Adding to the pressure is an ongoing inventory depletion cycle as folks in the supply chain wait to place orders out of Asia. That's happening because the longer they wait, the more the dollar strengthens and the cheaper the imports are. For example, PC DRAM memory prices are down about 10% this quarter.

We'll know more about Intel's full-year 2015 forecast when it reports earnings on April 14. But there are hints already. Deutsche Bank analysts downgraded the stock on Friday in response to the magnitude of the guidance downgrade, but believe a rebound  in subsequent quarters is likely based on channel checks showing inventories approaching unsustainably low levels. Canaccord Genuity believes now that expectations for Intel's PC business have been reset to more realistic -- or even beatable -- levels as its faster growing data-center and internet of things business lines can increasingly become the center of focus for investors.

Also on Friday were reports that Intel bumped Qualcomm out of the competition to supply ultra-fast wireless LTE modem chips in the upcoming iPhone 7 from Apple.

So while there is plenty of near-term pain, the  long-term thesis supporting Intel remains strong.

Credit Suisse analyst John Pitzer points out the company's business model and intellectual property enjoy significant competitive barriers to entry -- illustrated by one of the highest research and development plus capital expenditures to revenue ratios (or, for clarity: (R&D + CapEx) / Revenue) in the country. That should pay dividends as Moore's Law, the exponential growth in transistor density posited by Intel co-founder Gordon Moore in 1965, continues to increase the value of its industry leading processor design and foundry assets.

In summary, Intel might be dead money for the next few weeks or months, but a lot of pessimism is already discounted into the shares and they should have a chance at a recovery later in the year. 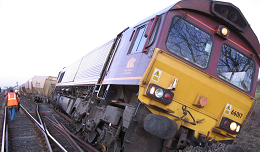 A look at why one of the hottest areas of the market has suddenly cooled.
Read More