In the two years between late 2012 and late 2014, transportation stocks -- cargo and people movers like UPS (UPS), Southwest Airlines (LUV), and CSX (CSX) --  were the place the be. TheDow Jones Transportation Average gained nearly 90% in a rise that was as unstoppable as a freight train; more than double the 40% or so gain posted by the Dow Jones Industrial Average.

But since late November, the trannies have lost momentum -- entering a long sideways channel as if someone jammed on the brakes. While the Dow Jones Industrial Average elevated to a new record high at the beginning of March, transports were hit by triple-top resistance. This is all a bit curious given the tailwind these stocks should be receiving from the epic collapse in oil prices from last summer's highs. 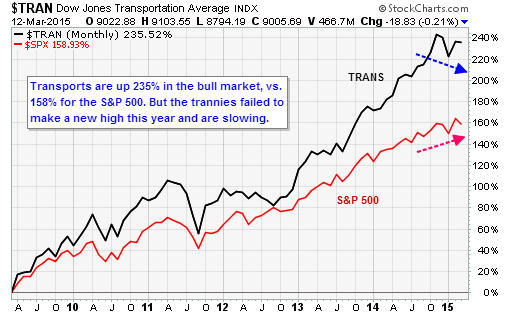 If the overall market is going to push higher in a sustainable way, logistics, airline, railroad, and trucking companies need to shift back into gear.

Part of the problem is that another terrible winter has had a chilling effect on the U.S. economy. In the wake of another disappointing retail sales report on Thursday, the Atlanta Fed's GDPNowforecast for the first quarter GDP growth rate has fallen to just 0.6%.

Another is that expectations are already quite high: According to data compiled by Yardeni Research, analyst estimates have exploded higher as lower fuel prices are imputed into earnings and valuation spreadsheets. Collectively, Wall Street is looking for earnings to grow 22.2% this year and 12.7% next year. 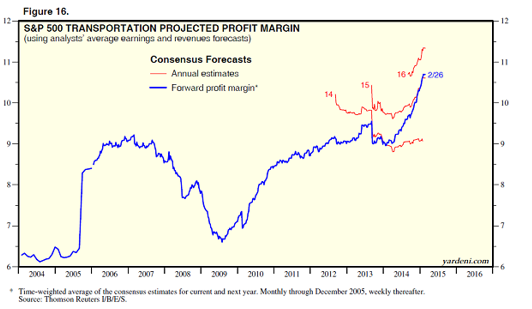 Yet analysts may have gotten ahead of themselves given the rebound we've seen in gasoline prices from January -- the fastest bounce since 2007 in fact -- due to factors such as labor strikes, refinery fires, and seasonal formulation changeovers. While West Texas Intermediate closed below $47 a barrel on Thursday wholesale gasoline futures are at $1.80 a gallon, up 46% from January's bottom.

As a result, net earnings revisions on transportation stocks are actually on the verge of going negative and have fallen to the lowest level since May 2014.

Once either fuel prices link back up with crude or estimates come back to earth, fresh opportunities will appear. FedEx was just upgraded by Credit Suisse on optimism over the company's investments in its ground shipping business -- an area that enjoys higher margins and is less capital intensive than its Express service. FedEx's efforts have seen its share of the total ground shipping business grow from 17% in 2006 to more than 30% now. It may be time to get onboard.

The Drag of a Strong Dollar