The setbacks this week have pushed the S&P 500 under its 50-day moving average for the first time since January, and the benchmark index is now down 1% for the year.

The damage is getting serious: The percentage of NYSE stocks above their 50-day moving average has declined to just 44%. And this is not a matter of a bunch of nobodies getting hit. Black-and-blue blue chips include Colgate Palmolive (CL), Procter & Gamble (PG), Coca-Cola (KO), Johnson & Johnson (JNJ) -- the very foundation of many investors' long-term portfolios.

It's not that Americans are suddenly buying a lot less toothpaste, laundry detergent, soda, body wash and Band-Aids. It's that all these companies likely to suffer a nasty earnings drag from the rapidly climbing U.S. dollar due to their massive overseas exposure. 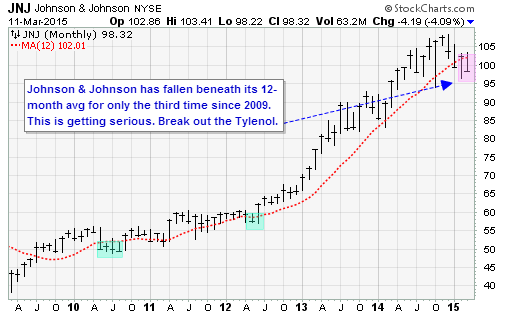 The greenback's rise is being driven by a number of factors, including strong indications the Federal Reserve is going to hike rates as soon as June for the first time since 2006, the relative strength of the U.S. economy, currency troubles in the emerging markets, and new stimulus efforts by the ECB.

The problem is the dollar -- which was famously derided by rapper Jay Z and model Gisele Bundchen a few years ago -- is up more than 25% from its early 2014 low. Further gains look likely as the currency achieves escape velocity, with Deutsche Bank looking for the dollar to gain another 19% against the euro by 2017.

A stronger dollar, weaker commodity prices and turbulence overseas all undermine the value of foreign profits earned by U.S. corporations at a time when earnings growth is already rolling over at a pace that's associated with recessions. The last time the dollar strengthened to this extent was in the midst of the last two recessions. 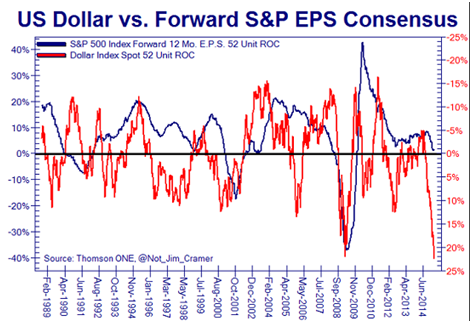 Already, Evercore ISI reports that earnings estimates for S&P 500 companies for the fourth quarter of this year have dropped to a -5% year-over-year decline. The chart above shows how forward S&P 500 earnings estimates (blue line) have tended to track the big changes in the dollar's valuation (which is in red, on an inverse scale, on the right side). When the dollar surged, earnings dropped.

Don't just take my word for it. Here's a look at the impact of the dollar's rise on these four blue chips when they reported quarterly results back in January and February, before the greenback climbed another 5%-plus:

-- On Jan. 29, Colgate reported that revenues suffered a 9% drop due to currency effects as its CEO warned that dollar volatility would remain a challenge.

-- On Feb. 10, Coca-Cola's management predicted currency effects would be a 5% headwind on revenues and upwards of an 8% headwind on profits before tax.

-- On Jan. 20, Johnson & Johnson reported that fourth quarter 2014 results were pulled down -4.5% due to currency effects and warned that if currency rates were to stay where they were, fiscal 2015 earnings per share, which they guided at between $6.12 and $6.27, would be pulled down by 42 cents. The dollar has since risen nearly 7%.

In short the whole concept of the dollar and earnings may seem esoteric, but it is very real and explains in large part while the market has struggled. Expectations of poor results in the current quarter are being "discounted" into stock prices now.

Some good news? Sure. Pessimists tend to overdo the angst, so dangers tend to become over-discounted -- and that could set these companies up for a healthy rebound if they beat reduced expectations when they report earnings in April. 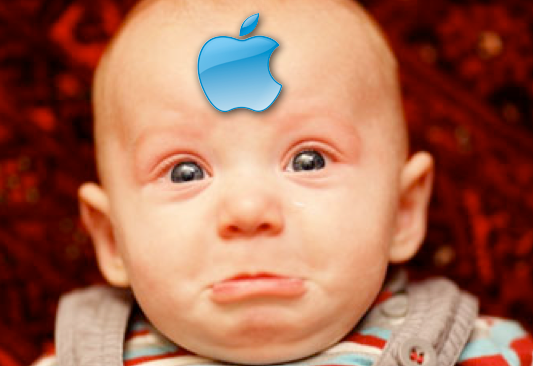 Apple completes journey from rebel to old maid by replacing AT&T in the DJIA.
Read More